Betsy started sailing at age seven, because her father insisted. Grumpy at first, soon Betsy was singing with her pals as they slipped happily over Barnegat Bay. In 1977 she found herself at Tufts University, which just happened to have the best sailing team in the country. When her father died during her freshman year, a friend persuaded her to go sailing on Upper Mystic Lake. For the first time Alison realized her natural aptitude for the sport.
A self-described seat-of-the-pants sailor, she learned the technical side from talented Tuft’s teammates. She credits numerous mentors, like Dave Perry who told her to buy a Laser, then told her how to sail it in heavy air: “pull everything tight and hike” (she did, winning her first, full-rig Laser regatta); her coach Joe Duplin, who pushed her to do more than she thought possible; and fellow collegians like Ken Read, Tommy Lihan, Morgan Riser, and Lynn Jewell Shore.

An Honorable Mention for All-American at Tufts in 1981, Alison has a unique ability to quickly apply what she learns. Ken Read told her how to sail a J-24 over lunch, after which she won the first of her five Women’s Keel Boat Championships.

Voted Rolex Yachtswoman of the Year a record five times, Alison says she never felt discriminated against on the water: “You have to prove yourself. When you get the job done on the race course, you develop respect.”

In 1998, Allison was asked to coach the USA team in the World Disabled Sailing Championship. Today she is the US Sailing Team Sperry Top-Sider Paralympic Coach. Alison is the 2000 BoatUS/National Women’s Sailing Association Leadership in Women’s Sailing honoree. 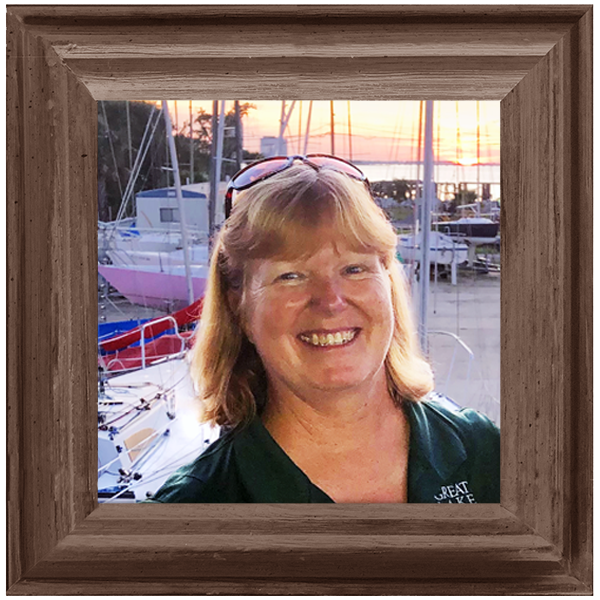 Debby is a five-time GYA Women’s PHRF Champion, multiple winner of the Coco Seemann Regatta (one design keelboat women’s regatta) and multiple winner of both the Race for the Roses and Women’s Trilogy. Grimm is a member of Southern Yacht Club where she was honored as outstanding woman sailor in 2012, New Orleans Yacht Club where she was named female sailor of the year in 2001, Corinthian Sailing Association and she was a founding member of the Lake Pontchartrain Women’s Sailing Association and has served on its board and as Commodore. Grimm is a US Sailing Small Boat Instructor and current board member of the National Women’s Sailing Associaiton.

Debby is a research scientist at Tulane’s Coordinated Instrumentation Facility. She is married to Casey Grimm, and they have a 16-year-old daughter, Kaylor. 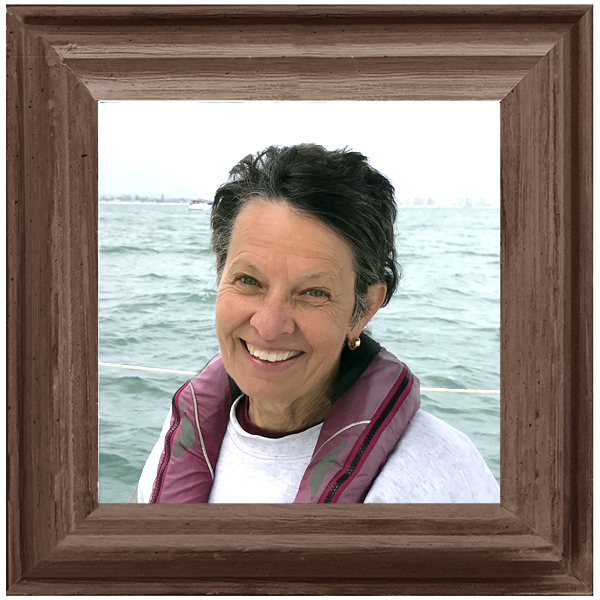 Huntsman began sailing as an adult and racing after fifty when she became helmsperson with an all women’s crew on Lake Pleasant. Since then, she raced regularly both on Lake Pleasant, Lake Pontchartrain and along the Gulf Coast. In 2017 she crewed in the Pensacola a la Habana race finishing third overall and first in class. Recently moving up to a big boat, she has been honing her doublehanding skills on her 37′ sloop, NOW.

In 2010 she began presenting Learn About Sailing Things (L.A.S.T.) monthly programs in Phoenix. She introduced L.A.S.T. to Lake Pontchartrain in 2012 and recently suggested the program to the Jackson Park Yacht Club in Chicago. As president of the National Women’s Sailing Association she is working to help other women sailors and organizations nationwide to bring scheduled workshops to their areas and encourage more women to become sailing instructors and obtain their captain’s licenses. She is currently working towards becoming a Safety at Sea moderator for US Sailing. 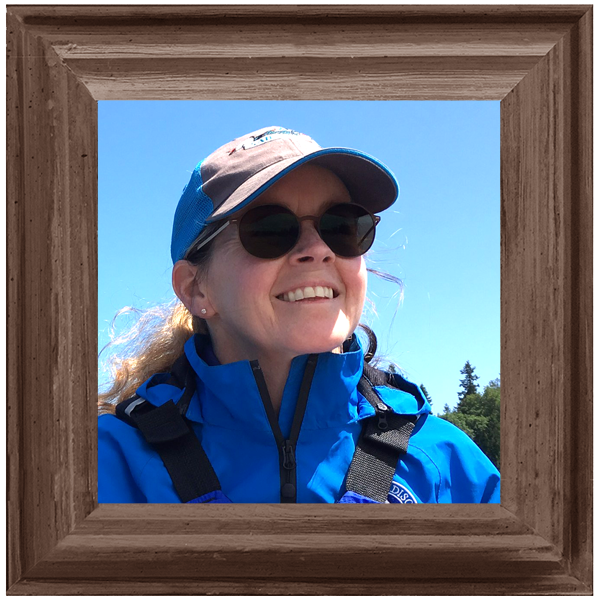 Co-skipper onboard the winning boat Sail Like a Girl in the 2018 Race to Alaska (R2AK), Haley Lhamon has been involved in racing since age eight. Listed among her other memorable races are co-skippering her J/35 Grace E on a nonstop, screaming broad reach to win Division II and the J/35 fleet in the 2002 Chicago-Mac Race and skippering a Snipe on the US team in the Western Hemisphere & Orient Championship in Uruguay in way too much wind, against Olympians.

Residing with her family on Bainbridge Island, Haley is past Commodore of the Port Madison Yacht Club. As the Sailing Coordinator at Bainbridge Island Parks & Recreation, she stays busy organizing classes and instructing. And as a volunteer, she coaches the Bainbridge Island High School Sailing Team and serves on the youth committee and board of The Sailing Foundation. 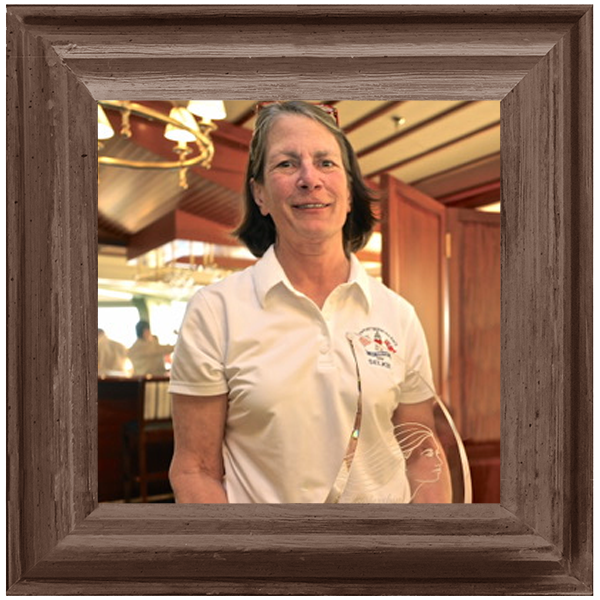 Sheila has cruised and raced over 100,000 miles, is a Past Commodore of the Cruising Club of America, has chaired the National Faculty for the Training Division of US SAILING, and is a Passage Making Instructor Trainer. She’s a past member of the US Sailing Board of Directors, is on their Safety at Sea Committee and moderates Safety at Sea Seminars across the country.

Sheila is also a trustee of the Mystic Seaport Museum. Her articles and stories on all aspects of sailing have been published widely. She has advised the sailing programs of the US Naval Academy and Outward Bound and is an offshore instructor for Orange Coast College. Sheila holds a 100-ton USCG Master’s license and a master’s degree in Marine Affairs. She lives with her husband in Rhode Island. They own a 38-foot sloop. 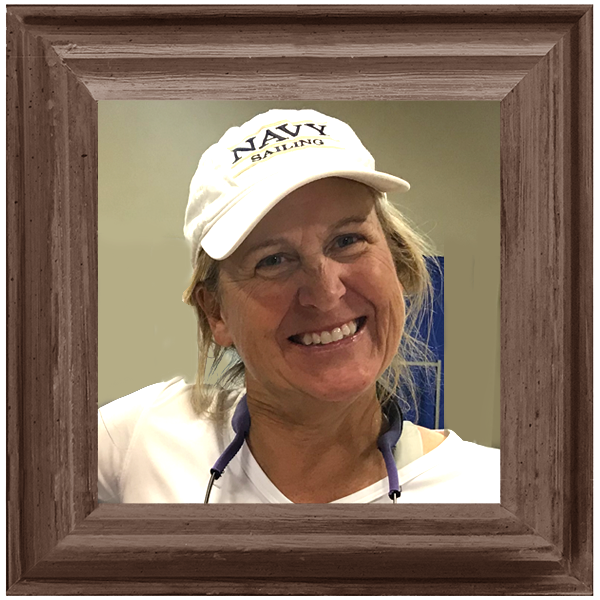 Margaret has spent most of her life, dealing with boating and water issues. In 2012 she was bestowed the NASBLA Award by the National Association of State Boating Law Administrators, for notable contributions to the betterment of boating. A 2014 honoree of the Darlene Briggs Marine Industry Woman of the Year award, Margaret also worked to promote boating safety initiatives and participated on the prestigious U.S. Coast Guard National Boating Safety Advisory Committee. She also served as president of BoatUS.

All along the way, Margaret campaigned her Laser sailboat in national championships, taking the top women’s radial trophy at the 2014 US Laser Masters Championships and the Atlantic Coast Championship. She was also a crewmember on the 2006/2007 US Sailing Team, campaigning the three-woman Yngling while vying for a slot in the 2008 Beijing Olympics. Margaret has raced inshore sailboats, including Lasers, Snipes, J22s, and J24s at the national and international levels. She has skippered in five Rolex Women’s Keelboat International Regattas, finishing fifth in 2001.

Margaret lives in Annapolis, Md., with her husband, Steve, and her children, Sophie and Ben. 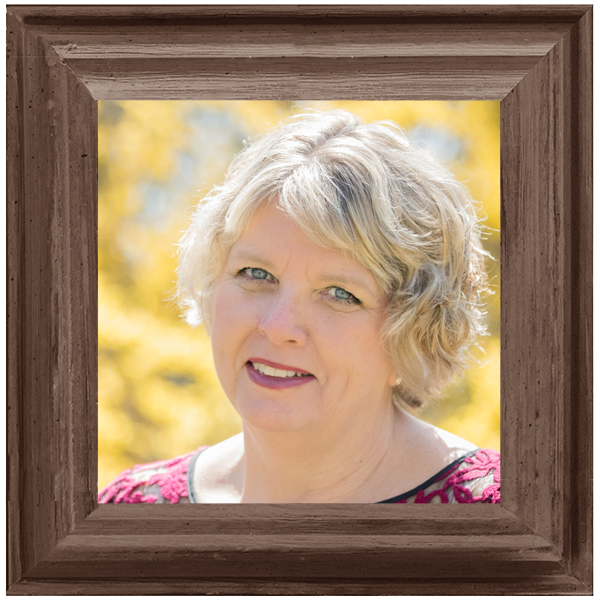 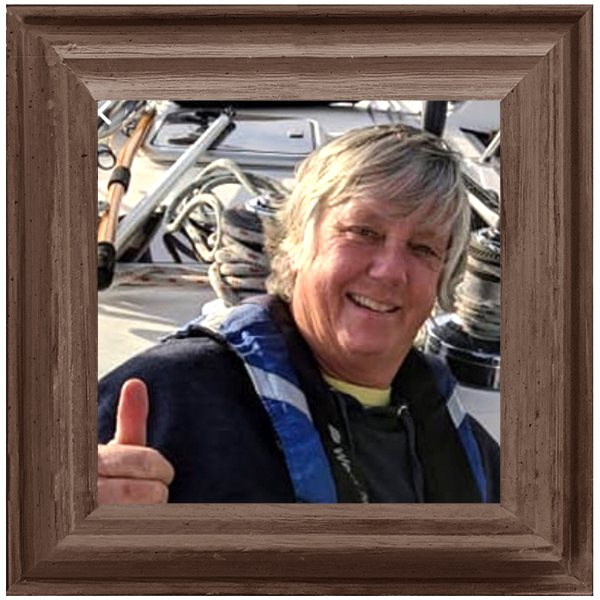 Fran started sailing in college in 1973. She has been an active ASA instructor since 1989 (currently ASA 201,203,204,209 and 214 certified. She has been a Director of the Venice Boys and Girls club summer sailing program for 15 years and currently teaches sailing at Blue Pacific Boating. Fran has been an Instructor at the SCYA women’s sailing convention in Newport Beach for 16 years.

Her personal sailing history includes 20 years of day sails, cruising in the local waters, racing on her own 35 ft vessel and other vessels of friends. She has chartered boats in New Zealand, Croatia, San Juans, and the Caribbean.

Captain Fan is a recipient of the prestigious SCYA Peggy Slater award, holds her USCG OUPV Captain’s License. She sails out of Marina del Rey, CA. Emily grew up sailing on the estuary and San Francisco Bay on her grandfather’s Tartan 30, Lelo Too. In her twenties she turned her passion for sailing into a career by earning her Coast Guard Merchant Mariner  License, and instructing at the Alameda Community Sailing Center (ACSC) and Club Med in Florida.

Emily later inherited Lelo Too (and her crew!) and they continue to race on the Oakland-Alameda Estuary weekly. Emily is currently the Program Director at Alameda Community Sailing Center and an instructor at Club Nautique. 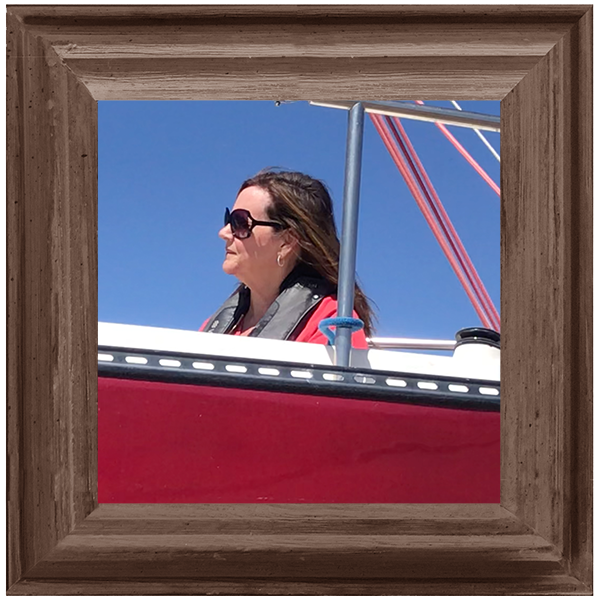 Dianna Andress started sailing in 2005 on Lake Pleasant in the Arizona desert after completing the ASA 101 class and bought a Catalina 25. Soon after she joined the Lake Pleasant Sailing Club and started cruising. She also crewed on various boats with the Arizona Yacht Club, soon discovering she wanted to be the one in charge. Andress acquired a Santana 20 and developed an all-woman crew. After that, she was hooked on racing!  Along with a group of sailing friends Andress charters a boat to a beautiful and exotic location every other year. 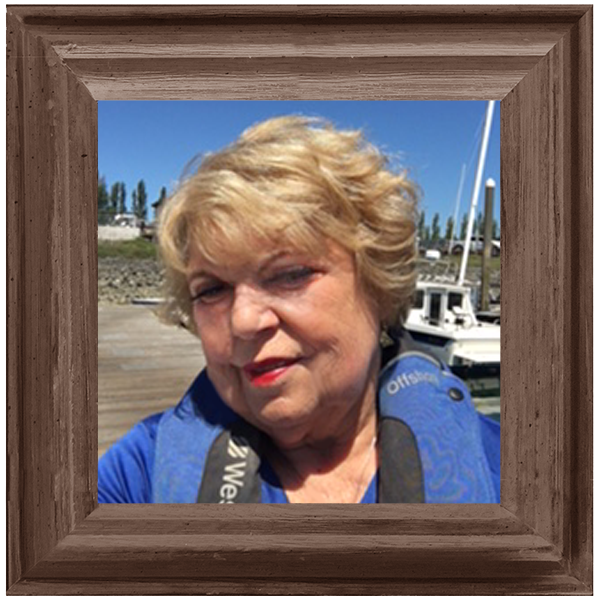 Linda Newland maintains the fastest woman singlehand record between San Francisco/Japan. She has sailed extensively on the West Coast — the Pacific Cup, singlehanded Transpac to Hawaii and the Los Angeles/Honolulu Transpac twice each. In 1997 her all women’s crewfinsihed second in their division . With a 100-ton license and a American Sailing Association instructors certification, Linda teaches inshore and offshore sailing classes.

Linda is certified as a US Power Squadron, Senior Navigator instructor. She co-founded the ongoing Northern California Women’s Sailing Seminar in 1992.

Linda is Past President of the National Women’s Sailing Association. 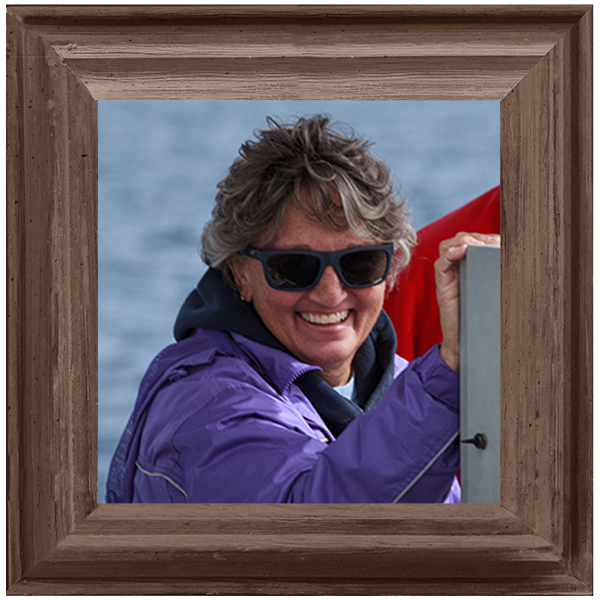 Wendy Larsen has been sailing for almost 50 years, having learned in her early teens on Lake Erie and Hoover Reservoir in Ohio.

Over the years she has sailed many types of boats from a Sunfish to a Beneteau 42. She has cruised and/or raced out of ports in North America & the Caribbean from the Great Lakes and Antigua and along all three US coastlines.

Wendy began racing in 2003 with the Arizona Yacht Club on a J24. She and her husband, Dave built a Mini-Transat 650m and they sail it on Lake Pleasant. Wendy is certified by US Sailing as a Principle Race Officer and is an International Yacht Training Worldwide certified instructor. She is also an instructor/leader with Sea Scout Ship 3500, based in Phoenix.

Lake Pleasant Regional park covers a total of over 23,000 acres (93 km²) of mountainous desert landscape, including the lake, and boasts a number of other recreational activities, such as mountain biking, camping, and hiking. The park also has an educational visitors’ center that provides information regarding the history of the lake, the construction of the Waddell Dam and the surrounding areas.