The National Women’s Sailing Association is a member group of women sailors from all corners of the globe. We welcome sailors of all levels, skills and interests.

To enrich the lives of women of all ages through education and access to the sport of sailing. We focus on the following four areas.

A message from doris colgate

Doris Colgate, President of Offshore Sailing School, founded the National Women’s Sailing Association (NWSA) in 1990. The mission of the association was to provide opportunities for women to learn and enhance their sailing skills, have fun and meet others at the same time. The mission has not changed. Our programs, such as our hands-on workshops, Diesel Engine Workshops, Safety at Sea, various workshops across the country, have provided the opportunity for thousands of women to do just that. NWSA a program of the Women’s Sailing Foundation. Elise Read came to sailing at age 33, when she bought a 1969 Southcoast 23 without knowing a thing about sailing. For the last 20 years, most of her sailing experience has been in racing both monohull and multihull vessels: course racing at events along the northern coast of the Gulf of Mexico, some inshore distance events, national regattas in the Corsair, Weta, and Rhodes 19 classes, and Heineken Regattas crewing on a Gunboat 66. She’s also done double-handed bareboat pleasure cruises in the Bahama and Grenedine Islands. Currently Read owns and sails Weta and Corsair Trimarans, and her newest boat, Purr, a J/80. Read joined the board in 2018. She was elected as President in 2021. [email protected] 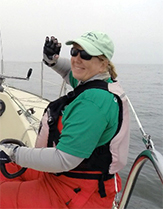 Debby Grimm began sailing at Girl Scout camp. She now competes in New Orleans regattas often skippering their family boat, Hot Chocolate a J30. She also sails Cayenne a J22, which she co-owns with three women. Grimm has competed in the Sundance Cup, Rolex and US Women’s Championship match racing events, the Rolex International Women’s Keelboat Championship, J30 North Americans, Race to the Coast, Great Lake Race, Lake Pontchartrain Racing Circuit and Knost (both one-design and PHRF). Grimm is a six-time Gulf Yachting Association Women’s PHRF Champion and multiple winner of the Coco Seemann Regatta (one design keelboat women’s regatta). She took honors multiple times for both the Race for the Roses and Women’s Trilogy on the Gulf Coast. Debby Grimm was female sailor of the year at New Orleans Yacht Club in 2001 and Southern Yacht Club’s outstanding woman sailor in 2012. Grimm was a founding member and served as Commodore of the Lake Pontchartrain Women’s Sailing Association. Dr. Grimm is a research scientist at Tulane’s Coordinated Instrumentation Facility. She is married to Casey Grimm, and they have an 18-year-old daughter, Kaylor. Grimm joined the board in 2021 and took on the role as Vice President later in the same year. [email protected] Barbara Robertson started sailing at Community Sailing in Boston. After moving to Mamaroneck, NY, she acquired a Catalina 22, Whirlaway. She has raced on Long Island Sound, cruised with friends, mostly in the Northeast and taught sailing for the Appalachian Mountain Club at their Fire Island cabin. Robertson spends summers in Maine, aboard a Freedom 36/38, Whimbrel. As a member of the Bluewater Sailing Club, she participates in their annual Maine cruise. She has presented at the annual conference, teaching women to run dinghies and anchoring. Robertson joined NWSA in 2017 and the board in 2019. [email protected] 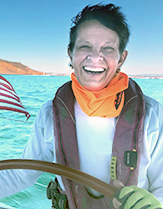 Captain Debbie Huntsman is a certified instructor for the US Sailing, US Coast Guard Auxiliary, the National Safe Boating Council, States of Louisiana, Utah and Arizona and California.

Huntsman is a past flotilla commander and District 11S public affairs officer for the US Coast Guard Auxiliary. She served as commodore for the Lake Pleasant Sailing Club in Phoenix, AZ where she first became involved with AdventureSail® and adult sailing programs. Huntsman is a past commodore for the Lake Pontchartrain Women’s Sailing Association where she introduced the AdventureSail® and L.A.S.T. (Learn About Sailing Things) programs to the Gulf Coast. Debbie joined the Board in 2016. She was elected Vice President in 2017 and President in 2018. [email protected] Newland holds the fastest woman singlehanded record SF-Japan. She has sailed and raced extensively on the West Coast, sailed the Singlehanded Transpac to Hawaii twice and is a veteran of the LA-Honolulu Transpac and the Pacific Cup. In 1997, on her own boat, she skippered an all women’s crew in the LA – Honolulu Transpac taking a second place division finish. With a 100-ton Merchant Marine License, Newland teaches sailing and is a certified American Sailing Association instructor. She is presently is Secretary for Recreational Boaters of Washington which represents recreational boaters interests in Washington state legislative and regulatory actions and is a past Commander and now Assistant Squadron Education Officer of  the Point Wilson Sail and Power Squadron in Port Townsend, Washington. She co-founded the ongoing Northern California Women’s Sailing Seminar in 1992. Newland is a retired school district administrator and maritime attorney. She joined the board in 2005 and has served as Vice President and President. [email protected] 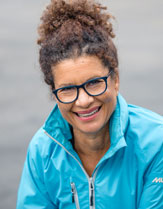 Captain Marie Rogers was the second woman in 118 years, the second black person, and the first black woman to be the commodore of the historic Los Angeles Yacht Club (LAYC). Marie races avidly. She was able to race in the 50th Transpacific race where she didn’t see another black person, let alone another black female, in the fleet. Marie also races close to home on her J 29, Rush Street, and does coastal racing on Marie, a Nelson Marek 55, that she shares with Bill, her husband. Rogers loves doing deliveries, cruising and teaching sailing. Marie is the 2021 BoatUS/National Women’s Sailing Association (NWSA) Leadership in Women’s Sailing Award recipient. Rogers joined the board in 2021. 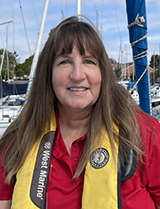 Originally from Salt Lake City, and now living in Valencia, CA, Barbara began sailing in Southern California waters in the early 90s and co-owned a Clipper Marine 24 with several friends as she was learning to sail. She prefers cruising and day sailing over racing, but has participated as crew on the 2005 Newport to Ensenada race and 2016 Baja Ha Ha. Also beginning in 2016 and for two more years, Morris took the helm on a boat in the annual Women on the Water, Woman at the Helm regatta in the Santa Monica Bay. She joined the Women’s Sailing Association of Santa Monica Bay in 2013 and has served as the Membership Director, Communications Director, Webmaster and Newsletter Editor and rose to become the Commodore in 2020. She has been on charters in the BVI, San Juan Islands in Washington, Penobscot Bay in Maine, Tahiti and most recently out of Newport, RI. Barbara enjoys First Mate status on her best friend’s C&C 40, which she has been sailing on since the mid 90s. Morris joined the board of directors in July, 2021. 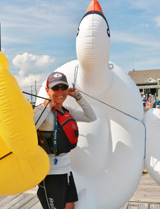 Elizabeth Naylor grew up sailing at summer camp in Hope, Maine in O’Day Widgeons, named for the Charlie Brown gang. Over the last 6 years, she has been the program director for the junior sailing program at the Hull Yacht Club. In 2018, Elizabeth was named the Madeline O’Neill Quinn Cup recipient for Outstanding Female Sailor. She is passionate about educating young people both on and off the water, recognizing that the skills we learn and embrace within a sailboat carry over into the rest of our lives. Elizabeth owns and occasionally races a Rhodes 19, Rebel Girl, as well as a Laser, Calvin. She lives in Hull, Massachusetts with her husband, Adam, and their 14 year-old daughter, Grace. Naylor joined the board in Sept. 2021. 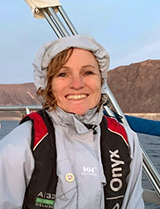 Gail Hine’s first boat was a Newport 20, which she and her husband sailed for the next 14 years. She successfully raced her second boat, a Nightingale 24, for the next 30 years. In 1998, she served as Commodore of the Southern California Yachting Association.Hine has been a leading force in promoting women’s sailing for over 45 years. She spearheaded the SCYA Women’s Sailing Committee for two decades. She conceived, created and produced the SCYA-sponsored Women’s Sailing Convention for 27 years (1990-2017) and now continues her legacy with Gail Hine presents the Sailing Convention for Women. She joined the WSF/NWSA board in 2001. Hine retired in 2021 after 20 years of service. 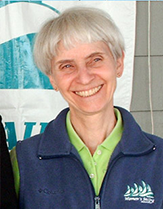 Joan Thayer grew up in Marblehead, MA, where she began sailing in an after school program in the fourth grade. Joan enjoys racing in one-design boats and has owned a 210, Shields, Sonar and a Rhodes 19.

Over the years, Joan has been involved with sailing at the local, regional and national level. She is a member of the Corinthian Yacht Club and its race committee, MASS Bay Sailing, US Sailing and America’s Boating Club Beverly-Marblehead Sail & Power Squadron. Joan chaired the Centennial Marblehead Race Week in 1989 and received the Massachusetts Bay Distinguished Service to Sailing Award that year.

Thayer has been active in NWSA since 1995. She co-chaired the inaugural Boston AdventureSail® in 1996 and has been the force behind the Women’s Sailing Conference from 2001 through 2019. Thayer became a Board member in 2000 retiring in 2018. She has served as treasurer, vice president and as president. Susan Epstein has sailed and raced on the waters of Massachusetts Bay since she was six years old. At nine, she was racing her own Lawley. She graduated to 110’s and Ensigns, and for the last 17 years has raced 210s. In recent years, she has experienced the joys of cruising. She is the mother of four daughters and one son and grandmother to 11. She was the advisor and coach to the sailing team of Wheaton College. At US Sailing, Susan is past chair of the Council of Sailing Associations and the past chair of the U.S. Women’s Match Racing Championship, a position she held for five years. Susan is also a former member of the Board of Directors of US Sailing. She joined the Board of NWSA in 2001and served from 2014 to 2016 as Vice President.

Betsy Alison is an acclaimed racer who has led and coached disabled sailors.

Doris Colgate is president and CEO of Offshore Sailing School and the founder of NWSA and the Women’s Sailing Foundation.

Nancy Erley is a two time circumnavigator and teacher, holding 50 and 100 ton licenses.

Sally Helme was the first female publisher and active in trade associations in the sailing industry. She developed the Take the Helm Program with Doris Colgate.

JJ Fetter is a two time Olympic medalist and a world sailing champion who was the first woman inducted into the Sailing World Hall of Fame.

Linda Lindquist-Bishop is a Strategist, Facilitator, Writer, Entrepreneur and Mentor as well as a world champion Sailor who led an Olympic Racing team. She currently runs the Rising Tide Leadership Institute.

Sheila McCurdy is a well-know sailboat racer as well as a writer and educator who serves on numerous boards.

Dawn Riley is executive director of Oakcliff Sailing Center, which trains racing sailors. She was crew on Maiden in the Whitbread Race.

*we promise to keep your information private.