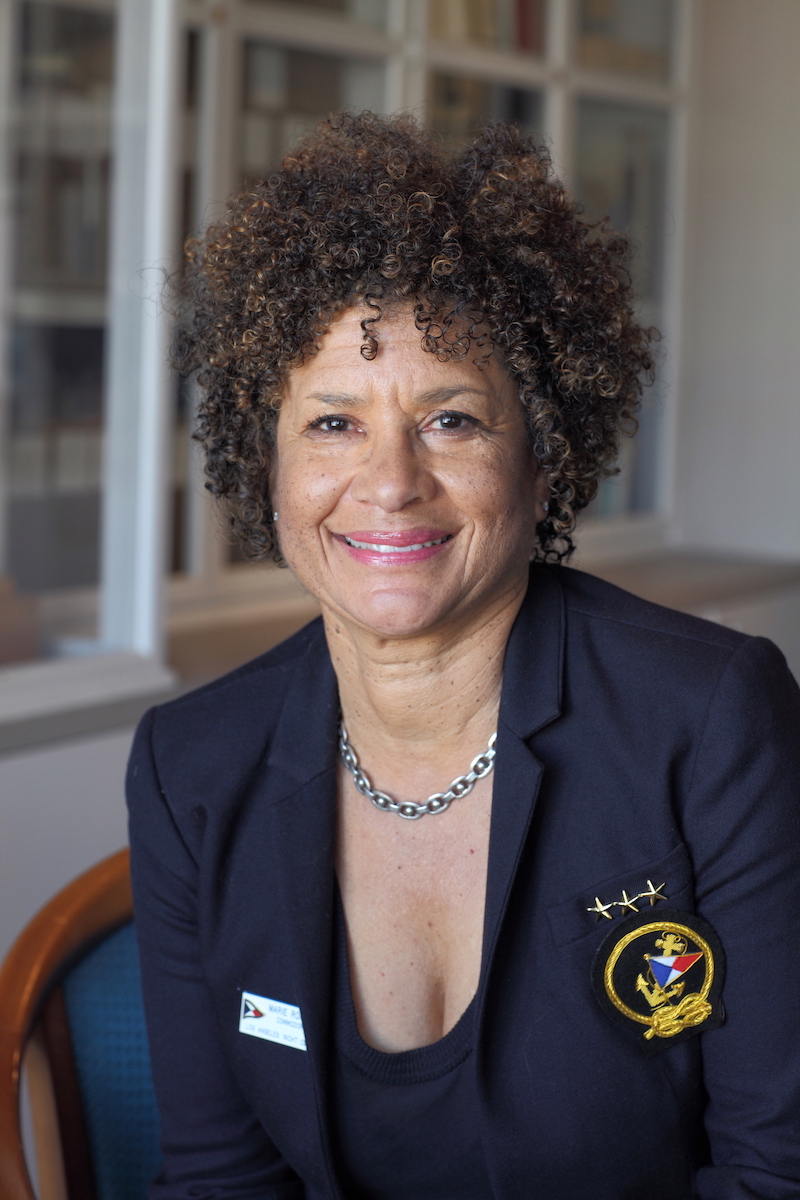 An exemplary leader of sailors

Race has been at the top of peoples’ minds for the past year. Much of the nation has taken a few small steps forward in recognising white privilege and the turmoil and pain caused from a long history of deep-rooted racial inequities. A whirlwind of racial conversations, reckonings for injustice, self examination and commitments for change swirled during the pandemic. NWSA boldly jumped headlong into the sometimes uncomfortable conversions and decisions, as work on equity has long been our task. But should race be the focus of a sailing leadership award? Yes! The lack of diversity in sailing should not be ignored, that includes race. Marie Rogers’ long-time leadership role in helping sailors move away from the idea sailing is white man’s sport, is germane. She would like all sailors to join her in a making a decisive course correction towards inclusion.

In a nutshell, Marie Rogers is a spectacular choice for the BoatUS/NWSA Leadership in Women’s Sailing Award both because of, and regardless of, the work she has done to increase racial diversity in sailing. Marie simply loves sailing and fiercely works for everyone, especially women like her, to learn about sailing, to enjoy sailing and to love the sport as wholeheartedly as she does. And she understands sharing sailing — with everyone — is healthy for the sport. For years Marie has embraced the hard work that must be done to increase inclusion. In her nomination letter Marie was quoted as saying, “Sailing is an amazing metaphor of how to get along.” We can all learn from Marie’s leadership and example.

Marie was the second woman in 118 years, the second black person, and the first black woman to serve as commodore at the historic Los Angeles Yacht Club (LAYC). In 2019 she stood alone on the west coast, and most of the nation, as a black woman at the helm of a major club.

Marie races avidly. She was able to race the 50th Transpac on Cazan, along with 72 other monohulls and six multihulls. Marie also races close to home on her J 29, Rush Street, and does coastal racing on Marie, a Nelson Marek 55 she shares with Bill, her husband.

Marie is adventurous and athletic. When her son Colin made friends with LA Yacht Club members, Marie watched as he went sailing. It made her yearn to get on a boat. Colin began crewing with the man who ran the junior program, on a 70’ sled. When one of the juniors mentioned that Colin’s mom knew how to sail, Marie was invited. She was offered the wheel. Marie was in her happy place. That man, Bill became Marie’s husband a few years later. He was happy to find a woman who also loved being on boats.

Marie did not settle for being ‘the yacht club wife’. She wanted to be a sailor in her own right. Marie went to sailing school. She studied weather, navigation and diesels. She became a certified sailing instructor. She obtained her captain’s license. She bought her own Cal 25 (on eBay), which became the platform for a community sailing program. She took groups of women on adventures to Catalina Island. She attended boat shows. She served on the yacht club board, eventually becoming Commodore. And Marie did more…

Marie Rogers stands out because she learned skills to be a solid sailor as an adult, then she became an instructor. She also stands out because of her gender, and because she is black. But importantly for consideration for the Leadership Award, Marie stood out because she was eager to share sailing. Marie did years work towards that end. Teaching sailing wasn’t a “job’ for Marie, it was a calling. Leading a major yacht club wasn’t a line on her resume, it was done in service to the sport. That’s why Marie was an excellent choice for the 2020 Peggy Slater Award, and was nominated for the BoatUS/NWSA Leadership in Women’s Sailing Award. Marie is a superb sailor and leadership example. She was selected not because she is a woman of color who scraped her way to sailing prominence. She earned our respect and recognition for her generosity and dedication to inclusion in the sport of sailing – as well as her history of making anyone welcome who needed encouragement to join our fun.